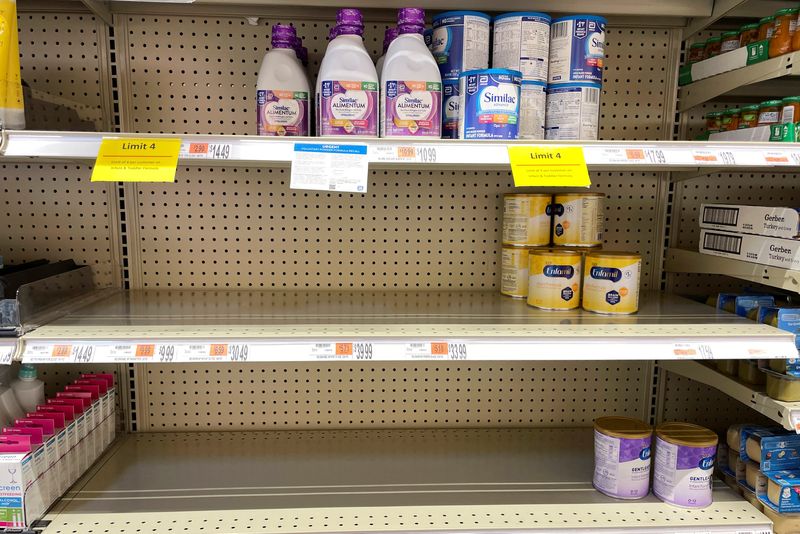 © Reuters. FILE PHOTO: Shelves for baby and toddler formula are partially empty, as the quantity a shopper can buy is limited amid continuing nationwide shortages, at a grocery store in Medford, Massachusetts, U.S., May 17, 2022. REUTERS/Brian Snyder

Delta will ship about 212,000 pounds of the British formula maker’s product from London to Boston and Detroit, where it will then get to retailers, the White House said in a statement.

Separately, the U.S. Food and Drug Administration said Abbott Laboratories (NYSE:) would have 16.5 million bottles of its Similac infant formula ready to be shipped from Spain this month.

It did not say when the bottles would be shipped into the United States, but said the government was looking at options to get the product to the U.S. “as quickly as possible”.

The shipments are the latest in a string of Operation Fly Formula flights aimed at restocking U.S. shelves after Abbott, a major U.S. infant formula supplier, saw a key factory in Michigan shut down earlier this year and recalled its product.

U.S. President Joe Biden this week said nearly 10 million bottles of safe infant formula would be brought into the country to be sold nationwide in the next two weeks.

His administration is also securing overseas formula made by Nestle SA (SIX:) and Bubs Australia.

The bay formula shortage comes as Biden grapples with high inflation, gun violence and other issues before November congressional elections.