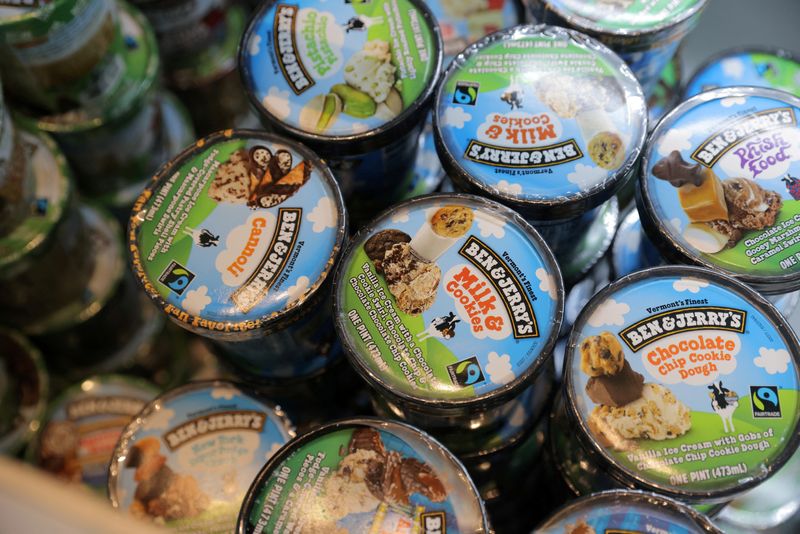 NEW YORK (Reuters) – Unilever (NYSE:) Plc was sued on Wednesday by a U.S. shareholder who said the company mishandled the decision by its Ben & Jerry’s unit to stop selling ice cream in Israeli-occupied Palestinian territories.

According to the proposed class action in Manhattan federal court, Unilever improperly concealed the decision before it was announced, recognizing that many U.S. states might divest from companies that support anti-Israel boycotts, yet stood behind it once the news became public.

Ben & Jerry’s announced last July it would stop selling its products in the Israeli-occupied West Bank and parts of East Jerusalem, and sever its three-decade relationship with an Israeli ice cream maker that rejected the ban.

The price of Unilever American depositary receipts (“ADRs”) fell nearly 8% over six days as Florida and Texas reviewed their relationships with the British consumer goods company, and some Jewish groups accused Ben & Jerry’s of anti-Semitism.

“As a result of defendants’ wrongful acts and omissions, and the declines in the market value of Unilever ADRs, plaintiff and other class members have suffered significant losses and damages,” the complaint said.

The lawsuit was filed by a Michigan pension fund, the City of St. Clair Shores Police and Fire Retirement System.

Unilever did not immediately respond to requests for comment. Chief Executive Alan Jope and Unilever’s board are also defendants.

Founded in 1978, Ben & Jerry’s has long positioned itself as socially conscious, and kept its independence to pursue that mission after being acquired by Unilever in 2000.

Ben & Jerry’s said last July that selling ice cream in the occupied Palestinian territories was “inconsistent with our values.”

Most countries consider Israeli settlements in those territories illegal, which Israel disputes.

What the Fed’s Rate Hike Means for Mortgages