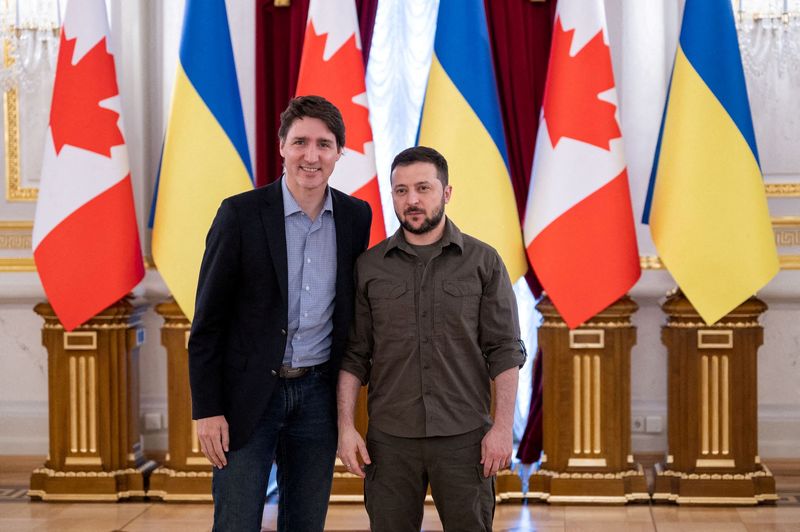 © Reuters. FILE PHOTO: Canadian Prime Minister Justin Trudeau and Ukraine’s President Volodymyr Zelenskiy pose for a picture before a meeting, as Russia’s attack on Ukraine continues, in Kyiv, Ukraine May 8, 2022. Ukrainian Presidential Press Service/Handout via RE

By Sergiy Karazy and Max Hunder

KYIV (Reuters) – Ukraine opposes Canada handing over a turbine to Russia’s state-controlled Gazprom (MCX:) for supplies to Germany as the move would contravene sanctions on Russia, a Ukrainian energy ministry source told Reuters on Thursday.

Gazprom cut the capacity along the Nord Stream 1 pipeline to just 40% of usual levels last month, citing the delayed return of equipment being serviced by Germany’s Siemens Energy in Canada.

“The sanctions forbid the transfer of any equipment related to gas,” the energy ministry source said.

“If, God forbid, this decision is approved, we will undoubtedly appeal to our European colleagues that their approach must be reassessed. Because if countries do not follow decisions they have agreed about sanctions, how can we talk about solidarity?”

A senior energy ministry source told Reuters that Ukraine had information that Canada was preparing to hand over the turbine.

A decision to return the turbine had already been taken, a source familiar with the issue said, adding that Canada and Germany do not want the turbine to be an excuse for Russia to cut gas supplies going through the Nord Stream 1 pipeline.

Ukrainian Energy Minister German Galushchenko in June lobbied Canada not to return the turbine to the Russian natural gas giant, according to a letter seen by Reuters.

The minister argued in the letter that Russia still had more than enough capacity through its transit routes to maintain supply without the turbine located in Canada.

“There are seven turbines, this is only one of them, and those that are now operating are sufficient for full capacity,” the energy ministry source said.

Ukraine has accused Moscow of using natural gas supplies as a weapon to put pressure on Kyiv’s European allies to dampen their support for Ukraine as it fends off Russia’s Feb. 24 invasion.

Kyiv has repeatedly called for more sanctions to be imposed.

“If the decision is made by the Canadians to hand over the turbine, regardless of whether it’s to Gazprom or to Germany for it to hand it over further … this would be a precedent of two G7 countries circumventing sanctions imposed against Russia,” the energy ministry source said.