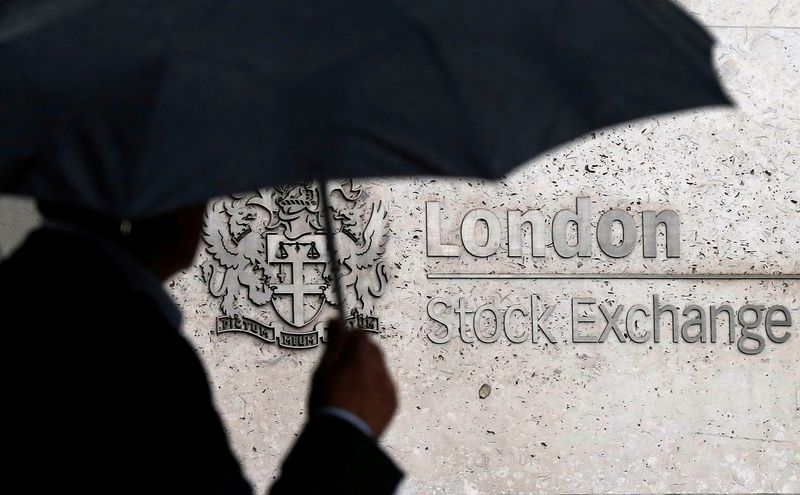 © Reuters. FILE PHOTO: FILE PHOTO: A man shelters under an umbrella as he walks past the London Stock Exchange in London, Britain, August 24, 2015. REUTERS/Suzanne Plunkett

By Saikat Chatterjee and Samuel Indyk

LONDON (Reuters) -British markets braced on Wednesday for more political drama, as Prime Minister Boris Johnson was rocked by further ministerial resignations and calls for him to go, although traders were reluctant to take new positions given the uncertainty.

Bookmakers have slashed odds on Johnson’s imminent departure and analysts said markets had largely priced in his exit after a series of scandals, including accusations that he breached his own COVID-19 lockdown rules, weakened his authority.

The pound dropped to more than two-year lows against the dollar but the moves were largely driven by a broad-based rally in the U.S. currency as investors, worried about rising recession risks, looked for safety.

British stocks gained, bouncing a day after hefty losses. Some analysts attributed the gains to hopes for more public spending under a new finance minister, but the rise in share prices was in line with gains across broader markets.

“However, the longer UK political uncertainty persists, the more we would expect it to be apparent in UK financial markets.”

Johnson’s grip on power was weakened after Rishi Sunak quit as finance minister and Sajid Javid resigned as health secretary on Tuesday. There was no let up on Wednesday with more resignations pilling on the pressure.

Analysts said markets would struggle for direction until they knew whether Johnson could weather the storm, or until they had a better understanding of the priorities of Nadhim Zahawi, the new finance minister.

A new team under Johnson, if he survives, could unveil populist spending measures in the short term.

“Expectations are that the new chancellor will lean towards more fiscal generosity than his predecessor has been recently,” said Paul O’Connor, head of UK-based Multi Asset Team at Janus Henderson.

But O’Connor said the new finance minister faced huge challenges including collapsing consumer confidence, decades-high inflation and a slowing economy. “The new chancellor is not going to be in a position to substantially alter the course of the UK economy,” he added.

The BoE’s trade-weighted sterling index, which measures the pound against a basket of currencies, fell on Monday to its lowest since January last year.

“We see two key factors driving the markets’ indifference to political risk in the UK. Firstly, markets have now all but written off Johnson as PM going forward,” said Stuart Cole at RBC.

“Secondly, there is no clear frontrunner to replace Johnson, so it is hard to take a view on what his departure would mean for policy.”