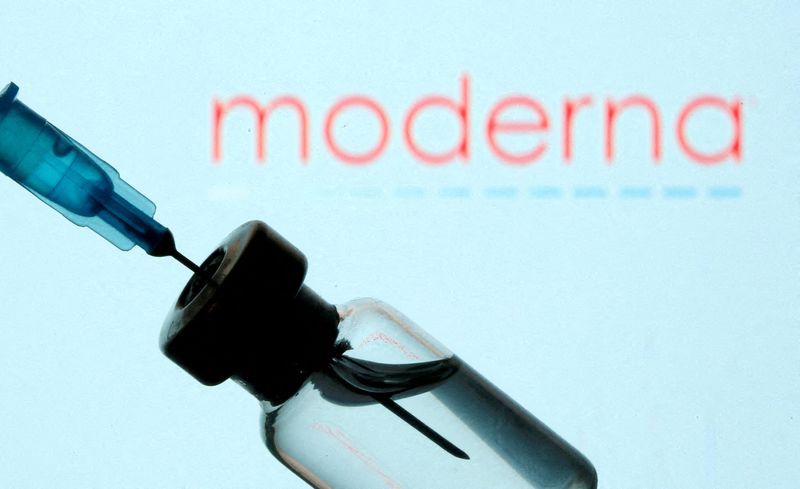 © Reuters. FILE PHOTO: A vial and sryinge are seen in front of a displayed Moderna logo in this illustration taken January 11, 2021. REUTERS/Dado Ruvic/Illustration

(Reuters) -U.S. Food and Drug Administration staff reviewers on Friday said Moderna (NASDAQ:) Inc’s COVID-19 vaccine appears safe and effective for use in children aged 6 months to 17 years old as a committee of scientists will meet next week to vote on whether to recommend the regulator authorize the vaccine in children.

The FDA’s reviewers said in briefing documents published on Friday evening that the vaccine had generated a similar immune response in the children than that observed in adults in previous trials.

“Available data support the effectiveness of the Moderna COVID-19 Vaccine in preventing symptomatic COVID-19 in pediatric age groups from 6 months through 17 years of age,” the FDA staff said.

The FDA staff also said the vaccine generally had a similar side effect profile in children as seen in adults, although younger children had fevers more frequently.

Both of the messenger RNA-based COVID-19 vaccines made by Moderna and Pfizer/BioNTech have been linked to rare instances of a type of heart inflammation called myocarditis, particularly in young men.

Some countries in Europe have limited the use of Moderna’s shots for younger age groups after some studies showed that it was tied to a higher risk of the heart inflammation.

The FDA said myocarditis is a known risk associated with the vaccine, but that the drugmaker’s pediatric trials were not large enough to quantify the frequency of the rare heart inflammation in pediatric age groups.

The Pfizer/BioNTech vaccine is already authorized in the U.S. for people aged 5 and older. The U.S. Centers for Diseases Control and Prevention (CDC) said in May that reports of myocarditis after that vaccine have been much lower in 5- to 11-year-old boys than in adolescents and young men, representing only a slightly elevated rate than normal.