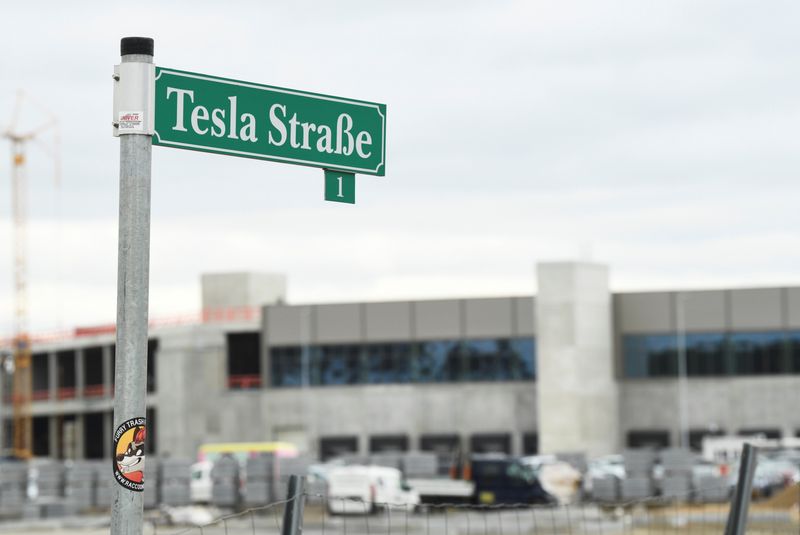 © Reuters. A Tesla sign is seen in front of the construction site of Tesla’s electric car factory in Gruenheide, near Berlin, Germany, March 4, 2022. REUTERS/Annegret Hilse

BERLIN (Reuters) – Tesla (NASDAQ:) is hiring 500 to 600 people a month at its Gruenheide plant and is working with the national employment agency to recruit workers no longer needed at German carmakers, the regional economy minister of Brandenburg said on Monday.

A total of 4,100 to 4,500 staff have been recruited so far, minister Joerg Steinbach said at a conference, of which around 10% were foreigners, primarily from Poland.

“The situation of carmakers in other regions realising that the production of electric cars requires less people than they had in the past is helping us, because we are trying to bring them here to Brandenburg,” Steinbach said.

The Gruenheide plant has been running on two shifts from May 23 with a third due to start before the end of the year, he added.

Tesla did not immediately respond to a request for comment.

Chief Executive Elon Musk earlier in June told staff that the company would reduce salaried headcount by 10%, as it has become “overstaffed in many areas” but added later on Twitter (NYSE:) that “hourly headcount will increase”.

How Covid Did Away With the Sick Day