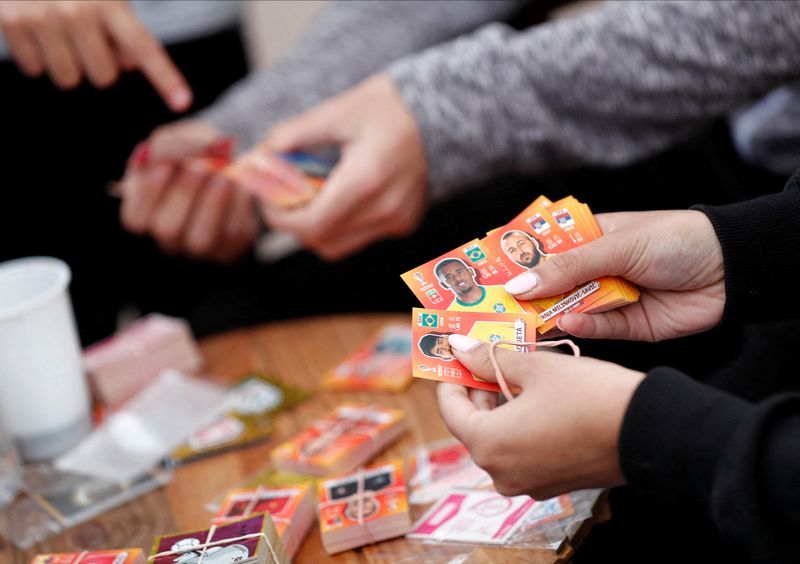 SAO PAULO (Reuters) – In South America, home to the some of the world’s starriest soccer players from Argentina’s Lionel Messi to Brazil’s Neymar, avid fans are starting to get jitters about their countries’ World Cup chances – and the rising cost of supporting them.

The region of about 650 million people is battling some of the world’s worst inflation, including in Argentina where prices are set to climb 100% this year. That is pushing up costs from soccer stickers and jerseys to game time snacks and beer.

“Prices are just too inflated,” said 20-year-old Brazilian Breno Nery, who was buying popular collectible soccer stickers in a Sao Paulo mall. A pack of five stickers has doubled to 4 reais ($0.79) since the 2018 Russia World Cup.

It is even worse in Argentina, where the suggested price of a pack has jumped 900% to 150 pesos ($0.95) after years of sky-high inflation. But a shortage has also led to prices doubling or tripling on the internet or alternative markets.

Prices have been surging for all sorts of goods from merchandise and collectibles to the food and beverages fans are likely to buy once the competition starts this month in Qatar. Brazil and Argentina are among the favorites.

In Buenos Aires if fans want to buy a soccer jersey, they will also have to reckon with even higher prices thanks to a skewed foreign exchange rate linked to strict capital controls and supply chain disruptions.

“This time Brazilian fans will bite their nails not only when cheering for the national team, but also when paying their bills,” brokerage XP (NASDAQ:) said in a recent report.

Despite the price rises, sales of Brazil’s kit have leapt 40% from 2018 by volume, said Nike distributor Grupo SBF. Not everyone is convinced, though.

“I think I’ll just wear a random shirt with ‘Brazil’ written on it,” said Daniel Santos, 20, speaking at a shopping mall in Sao Paulo.

The World Cup will be played from Nov. 20 to Dec. 18 – late spring in the southern hemisphere, a change from the normal dates that fall in the region’s winter.

The balmier weather has companies such as meatpacker BRF and brewer Ambev expecting sales to get a bump as South Americans gather with family and friends to watch matches with a cold brew or celebrate with a barbecue.

But fans will be in for some sticker shock.

Meat is now almost 80% more expensive in Brazil than four years ago, according to XP, a rise almost three times steeper than overall inflation. Soda and beer prices have surged 20%.

The World Cup even led Argentina to launch capital controls of overseas travel and spending dubbed as the “Qatar” FX rate, making travel to the Middle East nation even more expensive in local currency.