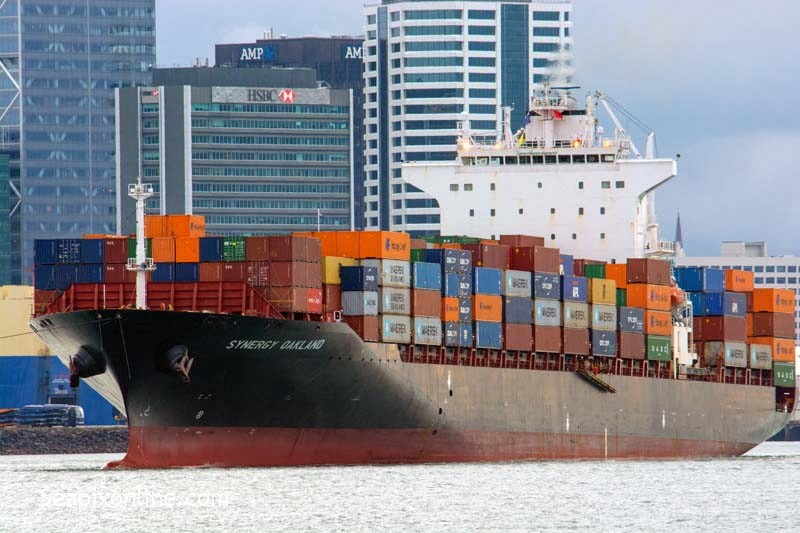 © Reuters. FILE PHOTO: A view of the container ship Synergy Oakland, in this undated handout image provided to Reuters June 16, 2022. Euroseas/Handout via REUTERS

SINGAPORE (Reuters) – Shipping companies are transforming rust buckets into gold mines in a modern-day alchemy that could fuel already rampant inflation for years to come.

The disruption to world trade caused by pandemic lockdowns and a shortage of new cargo vessels has pushed freight rates for ageing container ships to record highs.

Cashing in on the boom, shipping firms are locking in long-term leases lasting three to four years, which means consumers could carry on paying the price for the surge in costs until hundreds of new ships on order come into service.

Take the Synergy Oakland, a mid-sized vessel flagged in Cyprus that can carry more than 4,200 20-foot steel containers.

Greek firm Euroseas (NASDAQ:) bought it in 2019 for $10 million when it was already a decade old. As world trade spiralled into chaos last year, it raked in $21 million in just over 100 days at the highest daily freight rate in history for a ship of its size.

It squeezed in one more short-term charter earning around $10 million in the space of two months before going out on a four-year lease for $61 million in May, a six-fold return in itself on the purchase price three years ago.

“That was almost the perfect play in a rising market,” Symeon Pariaros, chief administrative officer of the shipping firm told Reuters. “We’ve not seen something like that in the history of the container market.”

The world’s container ship fleet continued to grow in terms of capacity during the pandemic, rising 2.9% in 2020 after increases of 4% in 2019 and 5.6% in 2018, according to Clarksons Research, a shipping analytics firm.

But the surge in demand for consumer goods during lockdowns, congestion at ports that tied up ships for longer than expected, and a slowdown in new shipbuilding, partly due to uncertainty about whether vessels would comply with new environmental rules, all contributed to the shipping crunch and record freight costs.

Container capacity jumped 4.5% last year, mainly because ageing ships that might normally be headed for the graveyard kept on sailing, but it hasn’t been enough to cool prices yet.

A Reuters review of more than 30 private transactions completed over the last six months showed that ship owners are leasing vessels on long-term charters at record rates to capitalise on the once-in-a-generation bull market.

In May, the cost of locking in container shipments soared a staggering 30.1%, a record monthly increase in long-term ocean freight rates, according to Xeneta’s ocean freight index.

Record rates have already contributed to higher prices for everything from second-hand cars to dining tables to bicycles and the pain for consumers is set to continue, experts say.

The International Monetary Fund (IMF) estimates the container shipping boom in 2021 accounted for 1.5 percentage points of global price rises this year, or about a quarter of the U.S. inflation rate.

“The impact of shipping costs on inflation is large and widespread, affecting countries around the world,” said Yan Carriere-Swallow, senior economist at the IMF’s Asia and Pacific Department.

While higher food and oil prices in the wake of Russia’s occupation of Ukraine feed through to consumer prices within two months, it can take up to a year to feel the full effects of container shipping costs, Carriere-Swallow said.

What’s more, COVID-19 outbreaks are still disrupting ports in China and while big shipping firms have ordered a record volume of new, supersize container vessels, most won’t come online until next year or 2024.

“The current still-high freight rates will continue to put pressure on consumer prices well into 2023,” said Jan Hoffmann, head of trade logistics at the United Nations Conference on Trade and Development.

“I fear that freight rates will remain higher than pre-COVID for many more years.”

The Navios Spring, which is currently sailing from California to China, was chartered for three years in January for $60,000 a day, a seven-fold increase over the $8,250 a day it cost two years ago, according to data from two ship brokers.

The ship flagged in the Marshall Islands and built in 2007 cost its original owners $42 million. It will earn $65.7 million over the length of its three-year deal, the brokers said.

Navios Maritime Partners (NYSE:), the ship’s operator, did not respond to requests for comment.

The Navios Amarillo, a sister ship to the Navios Spring, is booked on charters all the way out to January 2028, by which time it will be 21 years old. The ship will earn $75 million from that deal, far more than the $51 million it cost new, two ship brokers said.

GRAPHIC: Value of 10-year old container vessels in millions of US dollars (https://fingfx.thomsonreuters.com/gfx/ce/gdpzygdqmvw/ContainerVesselValue.png)

The container shipping industry as a whole made a mind-bending profit of $59.3 billion in the first quarter this year, shipping expert John McCown said, up from $19.1 billion in the same period a year ago.

“The carriers are winners and their significant increase in profits is being funded by higher prices for all products that move on container ships,” McCown told Reuters.

Denmark’s Maersk, the world’s second biggest container line with a market share of almost 17% according to intelligence provider Alphaliner, has cashed in.

Maersk posted record earnings in the first three months of 2022. Revenue leapt 55% to $19.3 billion and it raised its forecast for underlying earnings this year before interest, tax, depreciation and amortisation to $30 billion.

Mediterranean Shipping Company (MSC), which overtook Maersk to become the world’s largest container line this year, does not publish financial results. The company, which is based in Geneva, Switzerland, declined to comment for this story

U.S. President Joe Biden said on June 9 that congress should crack down on the outrageous prices being charged by shipping companies that control the market.

Maersk told Reuters it’s financial performance was due to exceptional market conditions and bottlenecks in the United States, adding that it had invested billions in improving America’s port operations and logistics.

Some of the big shipping firms are using their profits to hoover up what cargo ships are left at sky-high prices, which will in turn help to underpin high freight rates and fuel inflation in the future, analysts said.

WHEN WILL SHIPPING COSTS COME DOWN?

A record 503 second-hand container ships were sold last year, equivalent to 7% of the global fleet, Clarksons said, with another 108 sold in the first five months of 2022.

MSC, for example, has bought 200 second-hand container vessels since August 2020, according to market analysts.

With no container ships being scrapped this year, the average age of these vessels has risen to 13.9 years from 11 years back in 2017, Clarksons said.

That means cargo ships that are 10 or 15 years old, an age at which they were being scrapped before the pandemic, are worth up to 10 times what they were two years ago, sales data shows.

For instance, MSC bought the Xin Feng Yang Pu, a Liberia-flagged cargo ship currently sailing in the South China Sea, for $70 million last month, broker data shows. The same ship, which has been renamed the MSC Freeport, sold for $7 million in 2007.

Still, there are signs the boom could come to an end in the next year or two when many of the giants of the sea ordered by the major companies enter service.

In 2021, a record-breaking 555 container vessels worth $42.5 billion were ordered and 208 vessels worth $18.4 billion have been booked so far in 2022, according to the World Shipping Council, an industry group based in the United States.

Some of these vessels will be among the largest container ships ever built, stretching 400 metres in length and similar in size to the Ever Given, a cargo ship that got stuck and blocked the Suez Canal last year.

Maersk told Reuters that over the last year it had ordered 12 new large container vessels which are nearly four times the size of the Synergy Oakland.

If ports and supply chains were operating as they were before the pandemic, an influx of new vessels could pummel shipping prices, said Peter Sand, chief analyst at Xeneta, a freight rate platform.

“It holds the potential of flooring the spot market rates. Especially now that inflation is biting globally.”