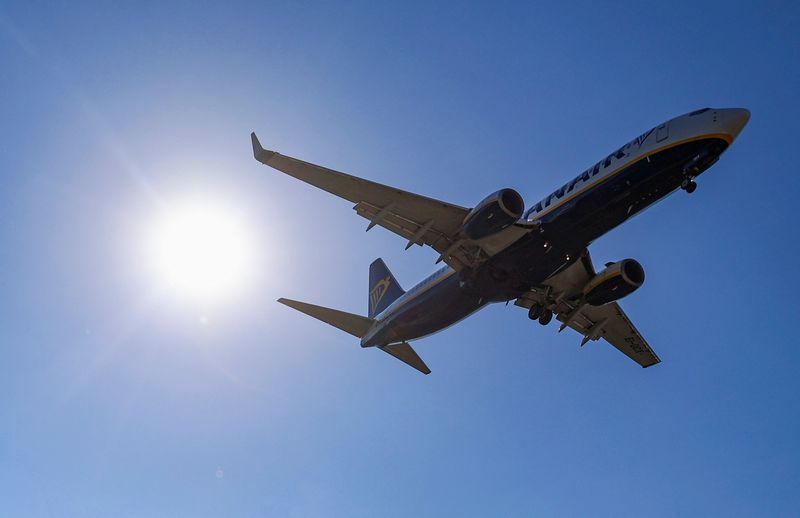 BRUSSELS (Reuters) -Ryanair Group Chief Executive Michael O’Leary said on Tuesday bookings at Europe’s biggest budget airline are strengthening and he expects summer fares to be between 7% and 9% higher than pre-pandemic levels.

Speaking to Reuters, he said the load factor, a measure of how well an airline is filling available seats, should be around 94% in June, almost reaching pre-COVID-19 pandemic levels.

He said he expects the travelling experience for European customers to improve over summer as airport management groups “iron out” staffing shortages through recruitment.

A snapback in air travel has triggered long queues at some British airports, as well as Amsterdam, Dublin and Toronto, as airport managers struggle to fill jobs fast enough.

Spanish cabin staff on Monday said they will go on strike six days late June and early July, but O’Leary said any disruption caused by industrial action was likely to be “tiny and inconsequential”.

He said there might be a small number of cancellations or delays but that the proposed strike action has “no support”.

He said there was no progress in talks with Boeing (NYSE:) regarding the acquisition of new aircraft, and he reiterated his criticism of the planemakers management, saying that Ryanair last spoke to Boeing “two or three months ago”.

Boeing has said it sold more than 700 MAX jets last year and will not do deals at unrealistic prices.

For Its Next Zero Covid Chapter, China Turns to Mass Testing