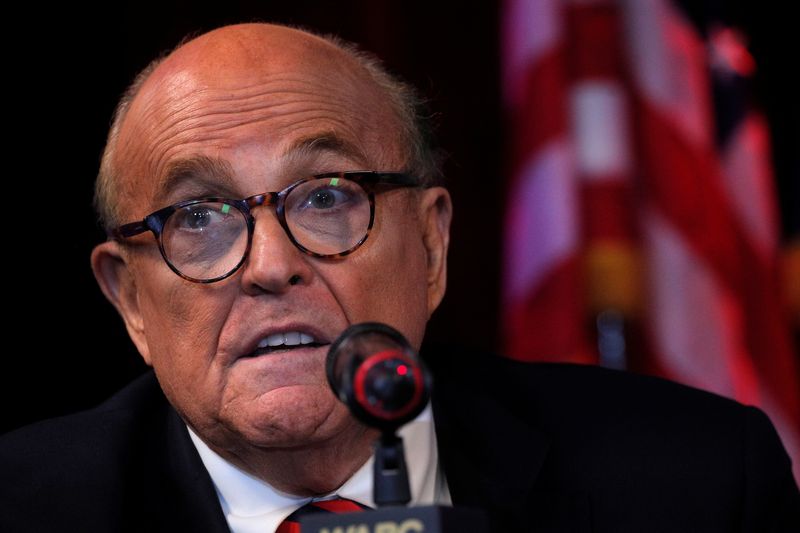 NEW YORK (Reuters) -Rudolph Giuliani has sued Smartmatic to recoup legal fees as he defends against its $2.7 billion lawsuit accusing him, Fox News Network and others of falsely claiming that the company helped rig the 2020 U.S. presidential election so Joe Biden would defeat Donald Trump.

In a counterclaim filed late Monday in a New York state court in Manhattan, Giuliani said the voting machine company’s defamation lawsuit, which he characterized as baseless, interfered with his constitutional right to speak freely on issues of public concern.

“Smartmatic’s litigation tactics, including its facially implausible damages claims, are a naked attempt to attack a well-known public figure” and amount to censorship, said Giuliani, a former New York City mayor and lawyer for Trump.

J. Erik Connolly, a lawyer for Smartmatic, said: “Smartmatic is confident in its claims against Mr. Giuliani.”

They and Giuliani, as well as Smartmatic, are appealing parts of a March 8 decision by state Supreme Court Justice David Cohen allowing most of Smartmatic’s lawsuit to proceed.

Smartmatic claimed that Fox News, part of Rupert Murdoch’s Fox Corp, decimated its business with a bogus narrative that its election software helped Biden, a Democrat, steal the election from Trump, a Republican.

The Boca Raton, Florida-headquartered company said Fox News did this to cater to Trump supporters, boost ratings and keep viewers from defecting to smaller right-wing rivals Newsmax and One America News.

Smartmatic faulted Giuliani for saying without evidence that the company was formed by people close to Venezuelan President Nicolas Maduro and his late predecessor Hugo Chavez, and founded “for the specific purpose of fixing elections.”

In his decision, Cohen found a substantial basis to suggest that Fox News had “turned a blind eye to a litany of outrageous claims” about Smartmatic, with reckless disregard for the truth.

Giuliani has had his New York law license suspended and faces ethics charges in Washington over his election claims.