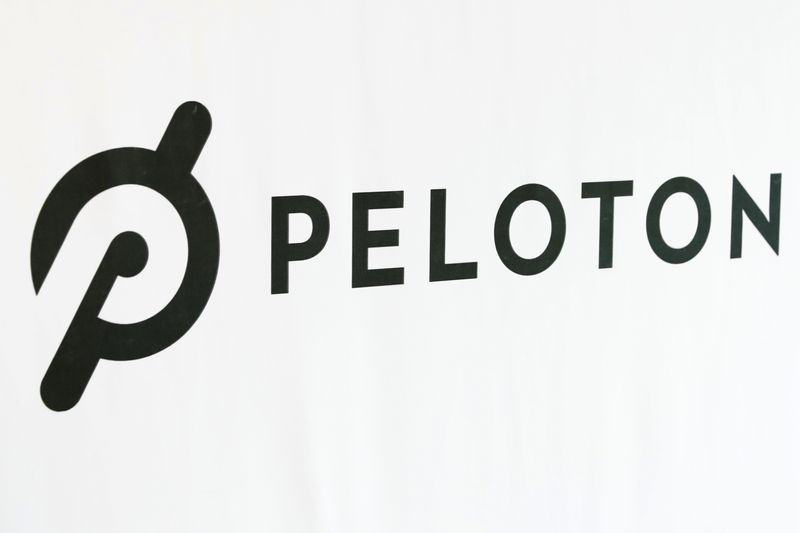 © Reuters. FILE PHOTO: A Peloton logo is seen after the ringing of the opening bell for the company’s IPO at the Nasdaq Market site in New York City, New York, U.S., September 26, 2019. REUTERS/Shannon Stapleton

(Reuters) -Peloton Interactive Inc on Thursday forecast second-quarter revenue below Wall Street estimates as the company grapples with weak demand for its fitness equipment amid a challenging macro-economic environment.

The exercise bike maker expects current-quarter revenue between $700 million and $725 million, compared with analysts’ estimates of $874 million, according to Refinitiv data.

Peloton (NASDAQ:) was all the rage among fitness enthusiasts during COVID-19 lockdowns, with the company hitting a peak market valuation of nearly $50 billion in early 2021. But with people returning to gyms the company saw demand for its fitness equipment dwindle.

Chief Executive Barry McCarthy has embarked on a wide range of cost-cutting measures since taking the job in February in an effort to pivot the company toward growth.

Peloton said on Thursday it was on track to achieve break-even free cash flow by the second half of 2023, but the company warned it was not a “guaranteed outcome”.

“There are risks we will underachieve our forecast, particularly in this economic climate and given the outsized importance and uncertainty of the holiday selling season on overall performance,” the company said in a letter to shareholders.

The company has introduced various measures such as tweaking bike prices, introducing Peloton Row, offering its products through third-party retailers and focusing on digital subscription plans to stimulate demand for its equipment and services.

“Given macro-economic uncertainties we believe near-term demand for Connected Fitness hardware is likely to remain challenged,” according to Peloton.

The company’s revenue for the first quarter fell to $616.5 million from $805.2 million a year earlier.

Peloton posted cash burn of $246.3 million in the quarter, compared with $651.9 million a year earlier.