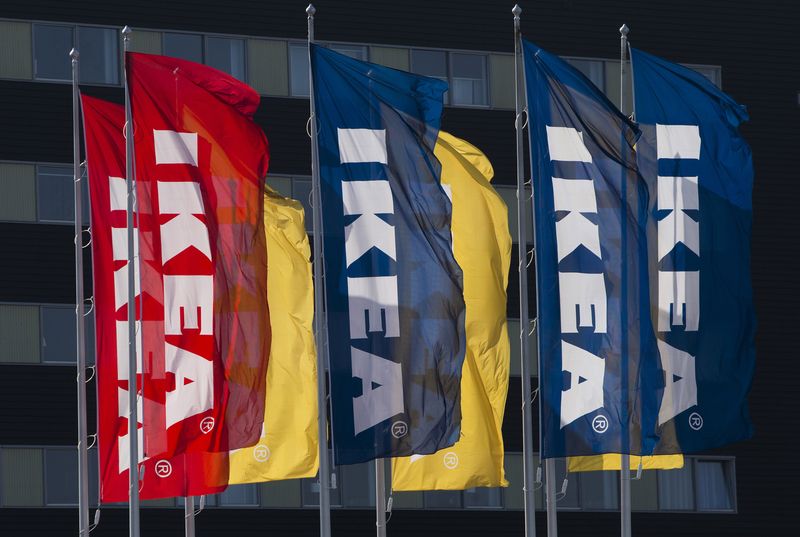 © Reuters. FILE PHOTO: The IKEA logo is seen on flags outside the IKEA Concept Center, a furniture store and headquarters of the IKEA brand owner Inter IKEA, in Delft, the Netherlands March 16, 2016. REUTERS/Yves Herman

STOCKHOLM (Reuters) – IKEA franchiser Inter IKEA posted a 45% fall in pre-tax profit for the year through August to 931 million euros ($908 million) as it passed on some, but not all, costs to store owners.

The fall reflected higher raw material and transport costs as well as the closure of its factories in Russia.

Inter IKEA, owner of the world’s biggest furniture brand and in charge of supply, said its operating profit margin narrowed to 4% from 7%.

“The result is not pretty,” Chief Financial Officer Martin van Dam said in an interview. “With raw material pricing and transport cost increases, it has been unprecedented. And it accelerated with the Russia-Ukraine conflict when we had to close so much.”

Retail sales hit new records in the year, but that was thanks to price hikes, not volume growth, Inter IKEA said last month.

On Thursday, van Dam told Reuters that Inter IKEA’s annual sales volumes to retailers fell by 7-8%, half of that due to pausing of most IKEA operations in Russia in March.

He said Inter IKEA may raise prices to retailers again later this year if input costs rise further, but would again not pass on all the costs. Over the past two years, Inter IKEA has absorbed 1 billion euros in cost inflation itself, he said.

He said purchasing costs had now topped out at an elevated level. “But this is not happening at the speed and magnitude we would have hoped,” he added.

Having struggled last year to meet demand, van Dam said availability of products was better this year. With continued high costs and falling consumer confidence, however, he said IKEA was bracing for another tough year.

He said promotion campaigns – something IKEA usually doesn’t do – and lower prices on some popular products would now be key to attracting cash-strapped shoppers.

Main franchisee Ingka, which owns most IKEA stores, including those in Russia, will publish its annual earnings on Nov. 24.

Ingka said last month it had not yet decided whether to sell its IKEA stores in Russia, where last year it generated around 4% of its group sales. Its shopping malls in the country remain open.

Inter IKEA in June put its factories in Russia up for sale and van Dam said on Thursday he expected they would be sold in 4-5 months’ time.

Polestar gets $1.6 billion in financing from major shareholders By Reuters