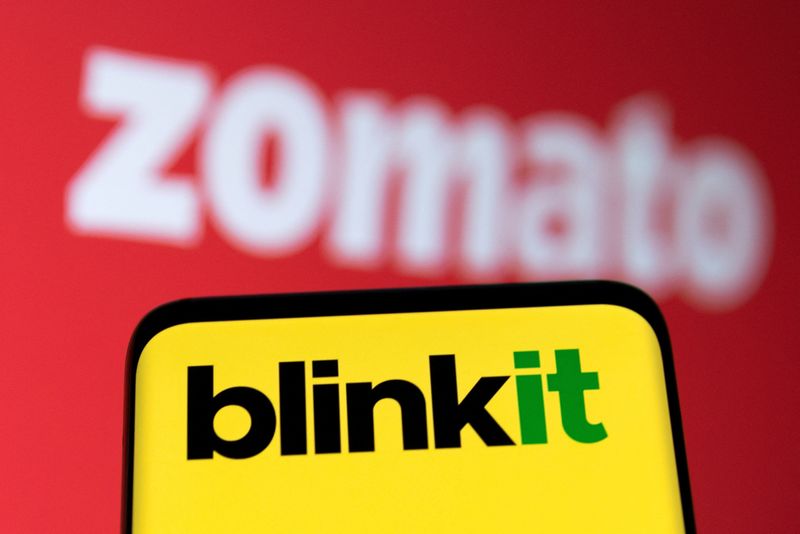 BENGALURU (Reuters) – Shares of India’s Zomato Ltd fell as much as 8.2% on Tuesday, extending losses for a second straight day as investors questioned the rationale of the company’s deal to buy local grocery delivery startup Blinkit.

The Ant Group-backed food delivery firm said on Friday it would acquire Blinkit for 44.47 billion rupees ($568.16 million) in stock, as it tries to gain a foothold in the fiercely competitive quick delivery market.

The deal comes after it bought a more than 9% stake in SoftBank Group-backed Blinkit for nearly 5.18 billion rupees in August, with a promise to invest as much as $400 million in the Indian quick-commerce market over the next two years.

“We believe Blinkit will require investments beyond the $400 million envisaged by Zomato, given rising competitive intensity,” analysts at Kotak Institutional Equities wrote in a note.

The company’s shares fell as much as 14% since the announcement of the offer, shedding nearly 76.78 billion rupees in market capitalization. They are also down nearly 48% since going public last July.

Issuance of new shares by Zomato to Blinkit, including employee stock option pool, would amount to dilution of about 7.25% of total outstanding shares post acquisition basis, according to a Morgan Stanley (NYSE:) client note.

The industry was worth $300 million last year and is expected to grow 10-15 times to $5 billion by 2025, according to research firm RedSeer.

Italy’s De Nora delivers on IPO, but prices at bottom of range By Reuters