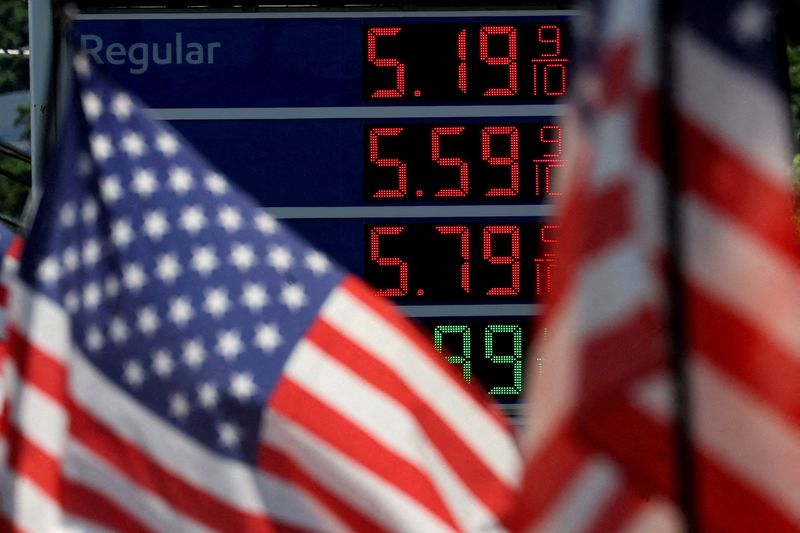 NEW YORK (Reuters) – Sky-high oil prices pose yet another obstacle to U.S. corporate earnings, and some on Wall Street are worried this could sink stock prices even deeper into the red.

has surged nearly 40% since the start of the year and stands at $110.73 per barrel as tight inventories, rising demand and the war in Ukraine keep prices near their highest since 2014.

Big retailers Target Corp (NYSE:) and Walmart (NYSE:) Inc have already warned that oil prices are cutting into their bottom lines. Some investors worry that the impact of oil prices may not yet be fully reflected in analysts’ estimates of other companies’ earnings and could deliver stocks another blow if those estimates start to fall.

The is down 21.1% year-to-date, on track for its worst first half of any year since 1932, according to S&P Dow Jones Indices, as the Fed tightens monetary policy in its fight against the worst inflation in decades.

Overall, every $10 increase in the price of oil cuts 0.3% from global gross domestic product, according to Ned Davis Research. The roughly $30 increase in oil prices since February has shaved 1% off the global economy, LaForge estimates, leaving the United States on a likely path toward recession this year.

“There’s no way to avoid it,” said John LaForge, head of real asset strategy at Wells Fargo (NYSE:) Investment Institute. “When commodities do real well you almost always find stocks are stuck in a bear market because they’re squeezing their margins.”

Last month, Walmart said fuel costs were $160 million more than expected, while Target said it was adding $1 billion to its forecast for transportation and freight costs for the full year. [L2N2XJ0LU]

Still, there are few signs analysts are incorporating rising fuel costs into estimates. Approximately 61% of corporate pre-announcements of second-quarter earnings results have been negative so far, well behind the 68.7% rate of negative pre-announcements for the prior quarter, according to Refintiv data. Most S&P 500 companies will report second-quarter earnings after mid-July.

Overall, the S&P 500 is expected to post 5.4% earnings growth in the second quarter, according to Refinitiv. Once energy companies are taken out, though, that falls to a 2.2% decline. Investors indicate they expect oil prices to stay high. Bullish positions in oil and other commodities are the most popular trade among global investors, according to a survey from BofA Global Research. A Reuters poll showed analysts expect prices to end the year at $99.52 a barrel and average $91.59 over the course of 2023. [/CEPOLL] The price of oil has risen above $90 per barrel for a total of 22 months out of the last 10 years, while mainly trading in a range between $40 and $80, according to Refinitiv data. Analysts at BlackRock (NYSE:) are among those warning that consensus earnings estimates do not appear to reflect the possibility of energy prices hitting growth. That is one reason “we don’t see the risk asset retreat as a reason to buy the dip – and expect more volatility ahead,” they wrote this week. Typically, high oil prices can slow the economy and eventually reduce demand, either through a recession or a change in consumer spending habits. That seems less likely this time around if Russia continues to face energy sanctions for the foreseeable future, said Francisco Blanch, commodities strategist at BofA Europe. “Even if the world goes into recession, we estimate Brent could average more than $75/bbl in 2023,” he said. This year’s decline in the S&P 500 has so far largely been due to dropping valuations rather than falling estimates, as investors have focused on the Fed’s aggressive response to inflation, said Garrett Melson, portfolio strategist with Natixis Investment Managers Solutions. Elevated oil prices will soon cut into earnings overall, eventually adding to the appeal of large technology companies that do not rely on broad economic gains like Google-parent Alphabet (NASDAQ:), he said. “There’s a real risk to margin compression and further downside from here,” he said.

Japan stocks higher at close of trade; Nikkei 225 up 0.08% By Investing.com