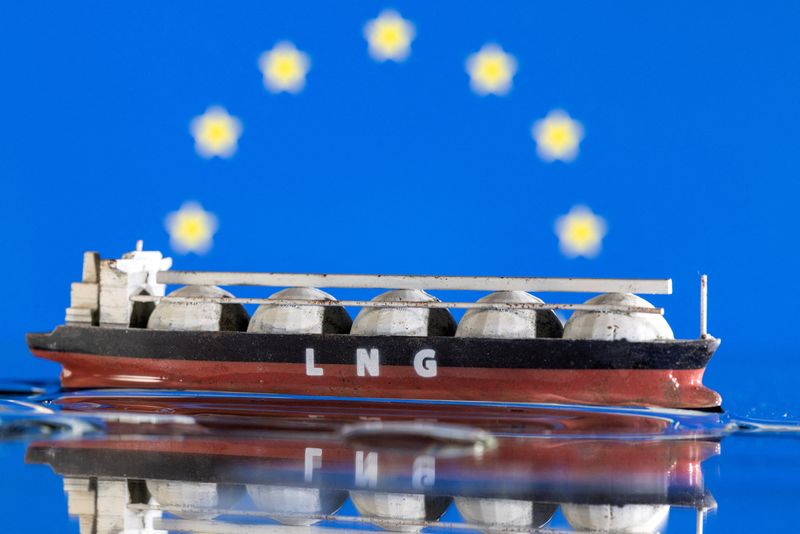 © Reuters. FILE PHOTO: Model of LNG tanker is seen in front of the EU flag in this illustration taken May 19, 2022. REUTERS/Dado Ruvic/Illustration

LONDON (Reuters – An at least three-week shutdown at Freeport LNG, operator of one of the largest U.S. export plants producing liquefied natural gas (LNG), is expected to delay cargoes to Europe, further stressing the continent’s drive to phase out Russian gas.

The outage at the plant, which provides around 20% of U.S. LNG processing capacity, began with an explosion at its Texas Gulf Coast facility on Wednesday. It has triggered alarm bells among players in market already struggling with reduced Russian supplies and resurgent demand in Asia.

The plant historically sent most of its cargoes to Japan and Korea, but the outage will affect Europe, which has been pulling U.S. cargoes from the east because of the higher prices. Russia’s invasion of Ukraine – actions that Moscow calls a “special military operation” – shifted flows to Europe from Asia.

A three-week shutdown will mean the loss of around 13-15 cargoes, although Europe should be able to make up its losses from gas storage. But the risk remains if the shutdown extends for a longer period, said analysts.

“An outage for three weeks minimum is a loss of around 940,000 tonnes of LNG. If you took an average cargo size around 70,000 tonnes, that’s about 13 cargoes,” said Alex Froley, LNG analyst at data intelligence firm ICIS.

The outage coincides with Nord Stream 1 maintenance and some Norwegian gas maintenance measures; however the market might be able to deal with it by withdrawing some volumes from storage potentially, said a person familiar with the market.

“If the outage lasts months rather than weeks, the total loss can be much greater, and Europe’s more comfortable inventory situation will not be quite as reassuring. We would then expect the strong European LNG price premium over Asia to return,” said Tamir Druz, managing director at Capra Energy.

The news has initially sent U.S. down as much as 14% as traders anticipated the outage would free up supplies and help rebuild U.S. storage for winter demand.

However, prices recovered later on Thursday and were up about 2% as the market focused more on high air conditioning demand from a heatwave blanketing parts of the United States, especially Texas. [NGA/]

In Europe, gas prices rose by up to a fifth on Thursday morning on fears lost U.S. shipments would stress a market already struggling with reduced Russian supplies. Prices cooled off at the market close. [NG/EU]

Japan-Korea-Marker (JKM) prices – which are widely used as a benchmark for Asian LNG – also rose, with The Platts JKM LNG assessed at $23.486 per metric million British thermal units (mmBtu) on Thursday, an increase of $1.694, or 7.8%, from the previous day.

Japan typically imports 6-7% of its total LNG supply from the United States during June, with LNG from Freeport accounting for at least half of the volume, said Kpler gas and LNG analyst Ryhana Rasidi.

South Korea has imported an average of about 20% of its LNG from the United States in June over the last two years. It could potentially lose at least 0.13 million tonnes of LNG, about 17% of its consumption, from the facility, she said.

In March, 21 cargoes loaded at the Freeport facility, carrying an estimated 64 billion cubic feet of gas to destinations in Europe, South Korea and China, according to the U.S. Department of Energy. That was up from 15 cargoes in February and 19 in January.

Around 70% of Freeport’s monthly supplies in the past few months went to the European Union and Britain. France, Britain, Turkey and the Netherlands have been the biggest European importers from Freeport LNG this year, industry sources said.

“Of 14 Freeport cargoes arriving at destinations in May, 10 of them went to Europe, two to Asia and two to the Americas.” Froley said. (Graphic: Freeport exports by destination – https://graphics.reuters.com/UKRAINE-CRISIS/FREEPORT-EUROPE%20UKRAINE-CRISIS/akvezrkdypr/FREEPORT%20EXPORTS%20BY%20DESTINATION%20(AIS)%20-%20Refinitiv%20Eikon.png)

Plastic Water Bottles to Be Phased Out at National Parks