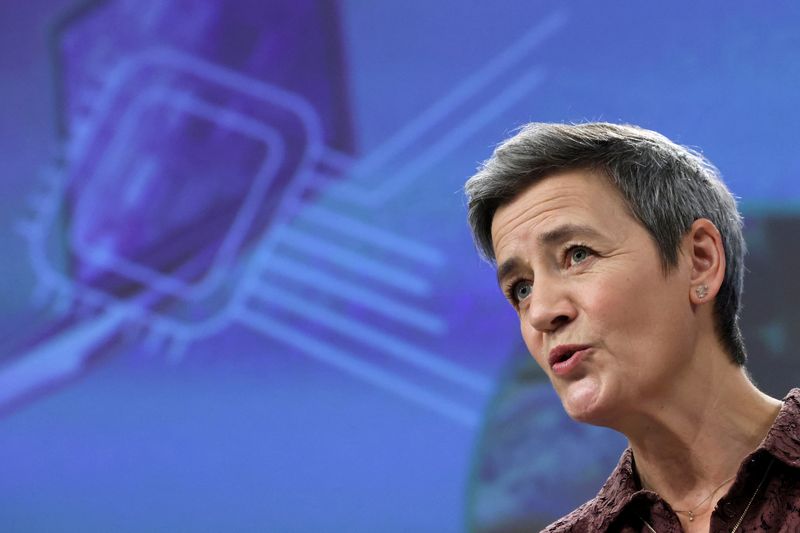 BRUSSELS (Reuters) – EU lawmakers gave the thumbs up on Tuesday to landmark rules to rein in the power of tech giants such as Alphabet (NASDAQ:) unit Google, Amazon (NASDAQ:), Apple (NASDAQ:), Facebook (NASDAQ:) and Microsoft (NASDAQ:), but enforcing them could be an issue due to regulators’ limited resources.

In addition to the rules known as the Digital Markets Act (DMA), lawmakers also approved the Digital Services Act (DSA), which requires online platforms to do more to police the internet for illegal content.

Companies face fines of up to 10% of annual global turnover for DMA violations and 6% for DSA breaches. Lawmakers and EU states had reached a political deal on both sets of rules earlier this year, leaving some details to be ironed out.

The two rule books for Big Tech built on EU antitrust chief Margrethe Vestager’s experiences with investigations into the companies. She has set up an DMA taskforce, with about 80 officials expected to join up, which critics say is inadequate.

Lawmaker Andreas Schwab, who steered the issue through the European Parliament, has called for a bigger taskforce to counter Big Tech’s deep pockets.

“We raised the alarm last week with other civil society groups that if the Commission does not hire the experts it needs to monitor Big Tech’s practices in the market, the legislation could be hamstrung by ineffective enforcement,” BEUC Deputy Director General Ursula Pachl said in a statement.

The DMA is set to force changes in companies’ businesses, requiring them to make their messaging services interoperable and provide business users access to their data.

Business users would be able to promote competing products and services on a platform and reach deals with customers off the platforms.

Companies will not be allow to favour their own services over rivals’ or prevent users from removing pre-installed software or apps, two rules that will hit Google and Apple hard.

The DSA bans targeted advertising aimed at children or based on sensitive data such as religion, gender, race and political opinions. Dark patterns, which are tactics that mislead people into giving personal data to companies online, will also be prohibited.

These Stocks Could Outperform in Second Half of 2022