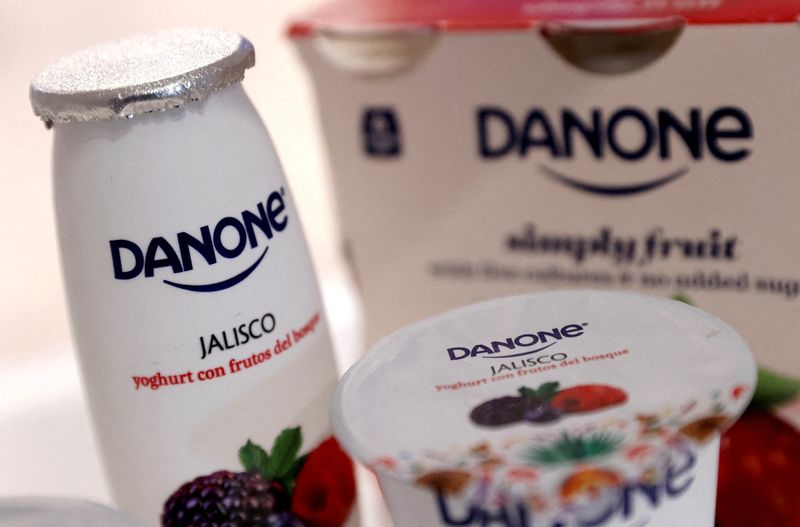 LONDON (Reuters) -French food giant and the world’s biggest yoghurt maker Danone is cutting the variety of products its sells, a top executive said, adapting to changing consumer shopping habits in Europe and beyond as inflation bites into household spending.

Supermarkets and the makers of packaged food are struggling to combat rising costs, with products ranging from to paper packaging becoming more expensive due to a protracted pandemic-led shipping crunch and Russia’s invasion of Ukraine.

Soaring inflation also means shoppers are tightening their belts. On Friday, Tesco (OTC:) warned Britons are buying less, switching to cheaper, own-brand products and shopping more often as they try to cope with the cost of living crisis.

Some food stores were forced to take products off shelves earlier this year because they could no longer afford to sell them.

Those factors are prompting one of the world’s top food manufacturers to rethink how it sells its best-selling products which range from Activia yoghurt to Evian water.

“Inflation is a dynamic, particularly in Europe, that we need to start to get used to,” Ayla Ziz, Danone’s global head of sales, told Reuters, speaking ahead of the Consumer Goods Forum’s four-day Global Summit conference in Dublin that began on Monday.

Danone is cutting back on so-called “stock keeping units” (SKUs), meaning some supermarkets would have fewer flavours and packaging sizes of Danone products, she said.

Fewer SKUs would help cut costs per type of product, she said, adding that Danone was reviewing its “entire portfolio” with every customer to see which SKUs it wants to discontinue.

Consumer companies like Danone make many versions of the same product – from big and small tubs of the same yoghurt to different flavours and value packs.

Simplifying the range could means some of these could be sacrificed to make it cheaper for retailers to stock and manage a smaller, less complex inventory.

For instance, supermarkets would need to allocate less money to storing, monitoring and transporting products.

She did not identify which ranges might be targeted. “It’s not a global cut of some products,” Ziz said.

Maria Castroviejo, senior analyst at Rabobank Research, said the steps made sense for companies trying to be more efficient and they mirrored actions by companies at the start of the COVID-19 pandemic.

Ziz said Danone wanted to “stay competitive” so it was not cutting back on promotions but was instead selling fewer types of products will also help it save logistics costs.

Ziz said Danone was investing in software to help it price products more accurately to meet levels consumers would accept.

Food manufacturers have been in prolonged talks since last year over prices with supermarkets. Discussions have been particularly tough in Europe as shipping costs have climbed to a record high.

India stocks higher at close of trade; Nifty 50 up 0.37% By Investing.com