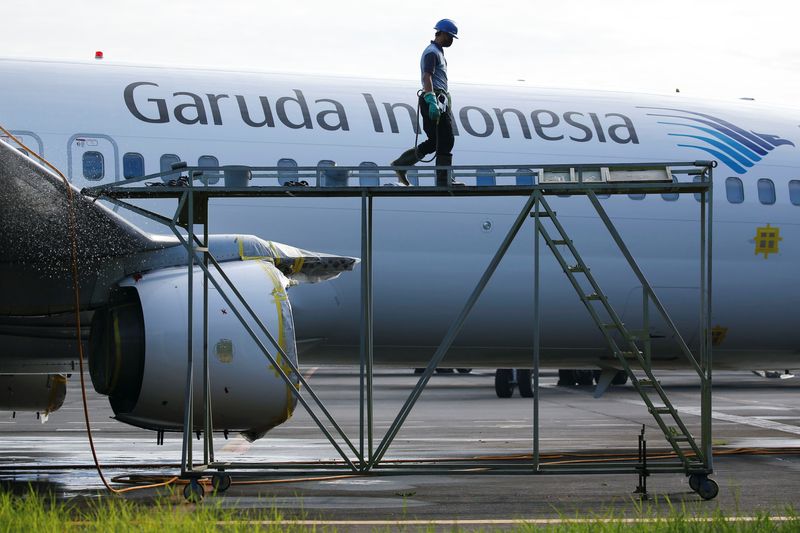 © Reuters. FILE PHOTO: A worker walks on a crane as a Garuda Indonesia’s aircraft is parked at the Garuda Maintenance Facility (GMF) AeroAsia, at Soekarno-Hatta International airport near Jakarta, Indonesia, January 21, 2022. REUTERS/Willy Kurniawan

JAKARTA (Reuters) – Garuda Indonesia’s creditors including Britain’s Rolls-Royce (OTC:) and French planemaker Airbus will vote on Friday on a $9.7 billion debt restructuring proposal, for which the flag carrier is confident of winning enough backing to move forward.

A simple majority from creditors at the meeting is needed to secure a binding agreement for all 501 claimants, which include holders of the firm’s $500 million sukuk.

The court verified 142.42 trillion rupiah ($9.65 billion) worth of claims against Garuda that it will recognise under the process, but that could be challenged right up to the vote.

The airline has proposed settling its debt to aircraft lessors and Islamic bond holders with new 9-year bonds and equity worth $1.15 billion, and offered to banks and state firms a loan maturity extension by 22 years with a 0.1% interest rate.

CEO Irfan Setiaputra on Thursday told a news briefing he was confident the plan would get the required votes and said Airbus and engine manufacturer Rolls-Royce had already backed the proposals.

“We are quite optimistic that the (support from) lessors and creditors are already at a level above 50%,” he said on Thursday.