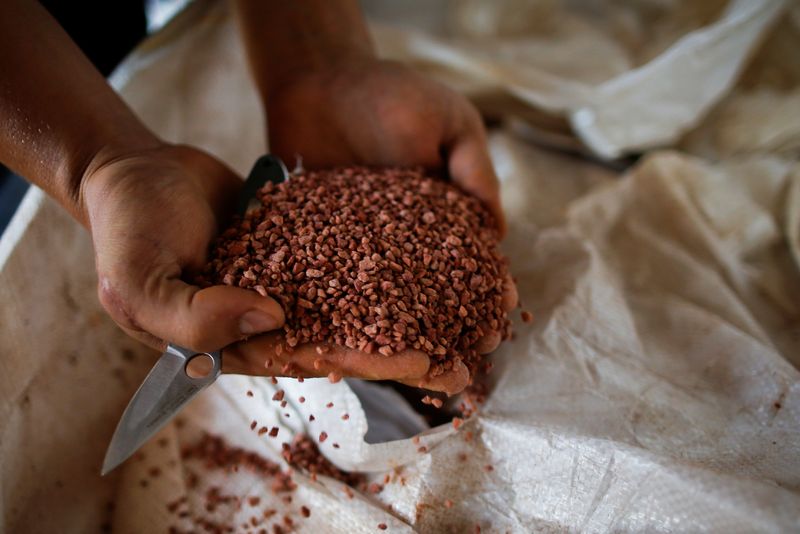 © Reuters. FILE PHOTO: An agricultural worker shows a fertilizer before spreading it in a soybean field, near Brasilia, Brazil February 15, 2022. REUTERS/Adriano Machado

SAO PAULO (Reuters) – Brazil imported record volumes of potassium chloride (Kcl) from Canada in the first half of the year, a sign that domestic farmers will have plenty of the fertilizer to nourish crops, boost yields and potentially expand area when sowing starts in September.

According to data compiled by consultancy Agrinvest Commodities and sent to Reuters on Thursday, Brazil imported 2.291 million tonnes of Canadian Kcl between January and June, a 71.2% annual rise.

“Canada only supplies potassium chloride to Brazil,” said Jeferson Souza, an Agrinvest analyst. “But the volume of Kcl imported by Brazil in the first half was so large that Canada became its second largest supplier of overall fertilizers in the period.”

Russia was the largest fertilizer supplier with China third, he added.

Imports of potassium chloride from Belarus fell by 16% to 949,708 tonnes, though it was still Brazil’s third biggest Kcl supplier even though Belarus was targeted by Western sanctions that could potentially disrupt trade.

Brazil Kcl imports from Russia, a country also hit with sanctions after its invasion of Ukraine, rose 27% to 1.935 million tonnes, the data show.

According to Souza, the Russians are selling fertilizers to Brazilian and U.S. importers, a situation “unthinkable” in the middle of March. Despite the war and sanctions, business is being conducted by Russia and cargos shipped.

Some 45% of fertilizer consumption goes to nourish soybeans in Brazil, Souza said. Brazil is the world’s biggest producer and exporter of soybeans.

Next season, if climate conditions allow, Brazilian soybean farmers could boost output by 18.5% to nearly 148 million tonnes, according to a Reuters poll, which projects a potential area expansion of almost 3%.

Germany stocks higher at close of trade; DAX up 1.97% By Investing.com