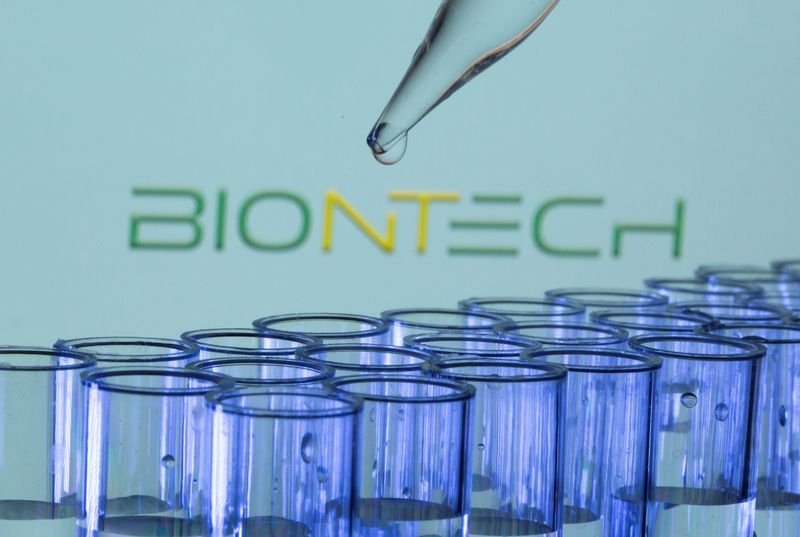 © Reuters. FILE PHOTO: Test tubes are seen in front of a displayed Biontech logo in this illustration taken, May 21, 2021. REUTERS/Dado Ruvic/Illustration

FRANKFURT (Reuters) -COVID-19 vaccine maker BioNTech said construction of an mRNA vaccine factory to enable African nations to jump-start their own manufacturing network would start on June 23 in Rwanda.

The groundbreaking ceremony in the capital city of Kigali is to be attended by Rwanda’s President Paul Kagame, further heads of African states, as well as representatives from the European Union and the World Health Organization, the biotech firm said in a statement on Thursday.

The German company’s modular factory elements, to be assembled in Africa to so-called BioNTainers, would be delivered to the Kigali construction site by the end of 2022, it added.

The company, which developed the western world’s most widely used COVID-19 shot with U.S. partner Pfizer (NYSE:), earlier this year mapped out a plan to enable African countries to produce its Comirnaty-branded shot under BioNTech’s supervision.

The company has said that the initial vaccine factory, made from an assembly kit and housed in shipping containers, would over the next few years become part of a wider supply network spanning several African nations including Senegal and South Africa.

The project push comes as Western-made coronavirus vaccine doses finally arrive in force on the continent, after a much criticised delay.

But uptake in Africa has fallen short of expectations, hurt by misinformation, logistical problems and a lacking sense of urgency in the population, among other factors.

BioNTech has said the BioNTainers could make other mRNA vaccines against malaria or tuberculosis, depending on product development progress and future public-health priorities.