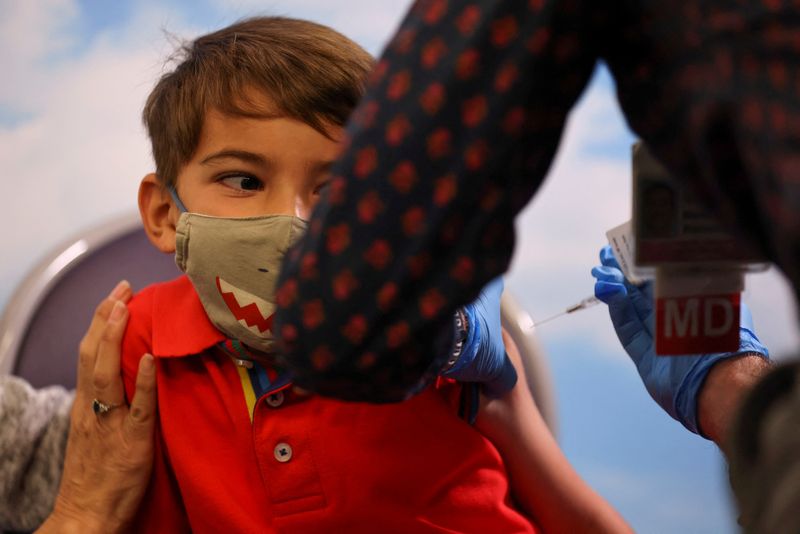 By Jarrett Renshaw and Ahmed Aboulenein

(Reuters) – Pre-orders of vaccines for children under age 5 have been slow, but Biden administration senior officials say they are not alarmed and expect the pace to pick up after federal approvals later this month.

The administration expects vaccinations of young children to begin in earnest as early as June 21, if the Food and Drug Administration and the Centers for Disease Control and Prevention approve the vaccines in separate meetings slated for next week, officials told reporters on Wednesday.

The administration has allowed states and others to pre-order from an initial batch of 5 million Moderna (NASDAQ:) and Pfizer (NYSE:) vaccines – 2.5 million each – as a way to expedite getting needles in arms.

Thus far, 58% of the available 2.5 million Pfizer vaccines have been ordered and just 34% of the Moderna vaccines, officials said.

“Our experience has been that people are slow to order and this has been true across each of the times we’ve opened up ordering,” a senior administration official said. “We’re not too worried or focused on that. We’ll continue to do the outreach.”

No COVID-19 shot is yet approved for children in the 5-and- under age group in most parts of the world. It remains unclear how many parents will get their young ones vaccinated as demand has been low in kids aged 5 to 11.

The administration has learned from previous campaigns that the people weighing whether to take a vaccine or get their child vaccinated will be influenced by those they trust, such as doctors and community leaders.

“We are going to meet people where they are and answer their messages, the officials said.

The officials said they are going to wait until the FDA and CDC approve the vaccines to discuss specific messaging around efficacy and how to keep families safe.

Things to Do in Chicago: Food, Museums and More

The Billionaires Behind a Push to Reinvigorate U.S. Chip-Making