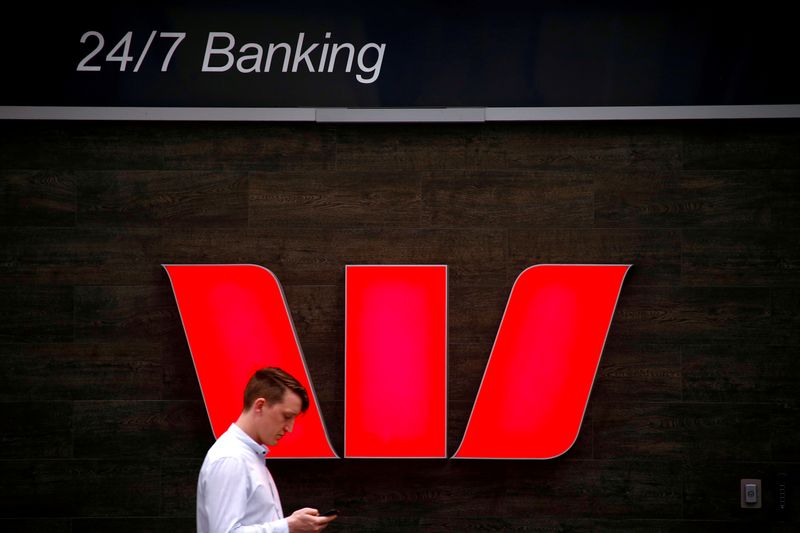 © Reuters. FILE PHOTO: A pedestrian looks at his phone as he walks past a logo for Australia’s Westpac Banking Corp located outside a branch in central Sydney, Australia, November 5, 2018. REUTERS/David Gray/File Photo/File Photo

(Reuters) – Australia’s no.3 lender Westpac Banking (NYSE:) Corp on Monday reported a 1.4% drop in annual profit, hurt by competition in its home lending business and a charge related to the sale of its life insurance unit, while raising its cost target.

Last month, the bank warned of a A$1.3 billion hit to the second-half net profit and cash earnings, driven primarily by a loss on the sale of its life insurance business.

While its lending margins in the second half did recover slightly from the first half, full-year margins were still down 13 basis points from last year. Since May, the bank has moved in step with the Reserve Bank of Australia to pass on rate hikes to its customers.

The bank also moved away from its cost target of A$8 billion by the 2024 financial year, revising it upwards to A$8.6 billion, citing wage increases from a tight labour market and regulatory costs.

Cash earnings came in at A$5.28 billion for the year ended September, down from A$5.35 billion a year earlier but beating a Morgan Stanley (NYSE:) estimate of A$5.23 billion.

ConocoPhillips, Petrobras and More By Investing.com

Twitter asks some laid off workers to come back, Bloomberg reports By Reuters