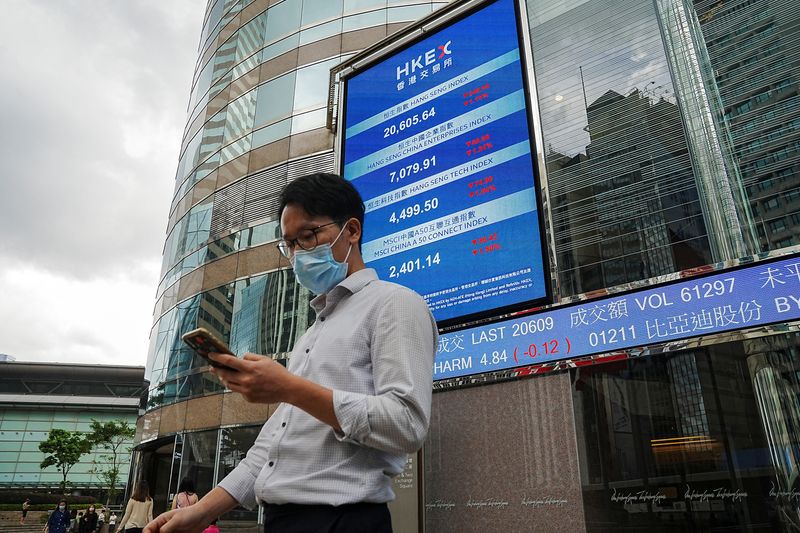 (Reuters) – Asian shares fell and the dollar steadied on Wednesday as investors waited for a key U.S. report on inflation to provide hints to the Federal Reserve’s plans for future monetary tightening.

MSCI’s broadest index of Asia-Pacific shares outside Japan fell 0.51%, while extended losses from the previous day and was down 0.65%.

“I don’t think that we are through the bear market woods yet – recession risks loom and I don’t think the Fed is done with its aggressive belt tightening,” said David Chao, a global market strategist for Asia Pacific ex-Japan at Invesco.

“I don’t think markets have fully discounted these variables. This week’s inflation data will certainly give us more clarity of the Fed’s near-term policy outlook.”

The slips in Asian markets tracked Wall Street, which closed on Tuesday with all three major indices down.

The dollar reversed losses overnight and was trading flat in Asia. The , which measures the safe-haven greenback against six major peers, was down 0.009% at $106.330.

“A strong CPI print this week could mean the Fed is back to its aggressive rate hiking path, which would re-strengthen the USD,” said Chao.

Oil prices fell slightly after an overnight surge petered out. futures were down 15 cents to $96.16 a barrel, while U.S. West Texas Intermediate (WTI) crude was down 22 cents to $90.28.