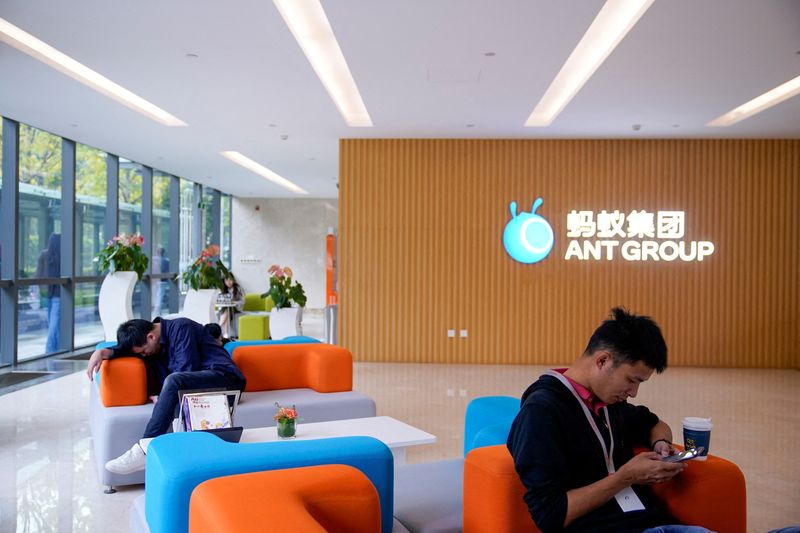 © Reuters. FILE PHOTO: A logo of Ant Group is pictured at the headquarters of Ant Group, an affiliate of Alibaba, in Hangzhou, Zhejiang province, China October 29, 2020. REUTERS/Aly Song/

By Yingzhi Yang and Fanny Potkin

BEIJING/SINGAPORE (Reuters) – Ant Group and Alibaba (NYSE:) are untangling their operations from each other and independently seeking new business as the Jack Ma-founded companies navigate China’s devastating regulatory crackdown, four sources familiar with the matter said.

E-commerce giant Alibaba Group Holding created what would become payments and financial services provider Ant and spun it off in 2011, although it still retains a 33% stake and the two companies have some overlap in leadership.

However, the duo have begun to unwind some of their collaborative arrangements as they try to recover from a sweeping technology sector clampdown that has sliced hundreds of billions of dollars off their value, shrunk revenue, and led to a record $2.8 billion fine for Alibaba.

In moves that would have been inconceivable two years ago, the affiliates have started to restrict access to each other’s services, compete for clients and even strike alliances with rivals, said the four sources, who spoke on condition of anonymity because they were not permitted to speak to the media.

Ant touted the companies’ close ties as a major selling point during preparations to launch a record $37 billion initial public offering (IPO), before Beijing unexpectedly pulled the plug on the float in late 2020.

It is now emphasising its independence from Alibaba, especially as it expands overseas, according to two of the sources, while Alibaba is building a cross-border transaction tool that could compete with Ant.

Alibaba counts around 1.3 billion annual users across its marketplaces who generated over $1.3 trillion in gross merchandise value (GMV) for the year to March 2022. It also has a suite of other businesses ranging from cloud services, to video streaming to travel bookings.

With Alibaba’s marketplaces recording more than double the GMV of U.S. peer Amazon (NASDAQ:) for the fiscal 2021 year, the group was once the pride of Chinese innovation, portraying corporate power on the global stage. Ma even boasted the group could become as large as the world’s fifth-biggest economy.

The moves by Ant and Alibaba towards operational separation underscore the new reality in China’s business landscape, as President Xi Jinping’s government frowns upon concentration of power in the hands of private sector conglomerates.

Authorities are wary about once-freewheeling “platform economy” companies crowding out smaller rivals and the risks they pose, though there are signs now that the clampdown is being gradually eased.

“Having businesses sprawling in both finance and technology can be deemed as too powerful in China, therefore ‘politically incorrect’,” said a Beijing-based fintech executive, who declined to be named due to the sensitivity of the matter.

Ant, which is in the midst of a regulatory-driven transformation, appears to be making progress in its bid to revive its IPO. Reuters reported last week, citing sources, that China’s central bank had accepted Ant’s application to set up a financial holding company, a key step to completing its revamp.

Ant said on June 9 that there was no plan to relaunch the IPO and it’s currently focusing on “rectification” work.

The separation of operations began at the organisational level late last year and soon grew to encompass significant strategic moves, according to two of the sources.

The two firms had for years shared an internal online forum where staff would actively discuss company matters and interact with top bosses, who also used the space to make internal announcements.

Ant staff were told in November that the company was setting up its own forum that Alibaba employees would not be able to access, the two sources said, adding that the company did not give a specific reason for that decision.

Alibaba’s forum will be out of bounds for Ant staff in the next few months, they said.

Ant employees had also in the past been able to apply for Alibaba jobs as internal candidates but they were told earlier this year that would no longer be possible and they would be treated as external hires, the two sources added.

A third person who had direct knowledge of the companies’ technological infrastructure arrangements said that Ant last year stopped many services on its flagship Alipay payment app from using Alibaba’s computing servers.

“Ant doesn’t want to be seen only as an Alibaba affiliate by existing or potential partners,” said one of the sources.

Alibaba, for its part, is courting overseas payment opportunities and in April launched Alibaba.com Pay, a cross-border transaction service for small businesses.

Disentangling itself from Alibaba, while not delivering a mortal blow to Ant, will take away some of Ant’s uniqueness, said Alexander Sirakov, managing partner at Aquariusx, a Shanghai-based investment consultancy.

“Both Ant and Alibaba will end up in a forced divorce not due to internal friction, but mostly because of what other people think and say their relationship should embody.”

Reuters was not able to establish whether Ant and Alibaba made the operational changes at the request of regulators, but industry executives said the overhaul fits a trend of distancing finance activity from internet operations in China.

It was a different world back in 2017 when Ma described his vision of an “Alibaba Economy”, predicting it could become as large as the world’s fifth-biggest economy.

Two years later, facing rising competition from the likes of Meituan and Pinduoduo (NASDAQ:), Alibaba and Ant set up a committee to assess how to build on Ma’s vision by establishing stronger alliances between Ant, Alibaba, and its units such as delivery arm Ele.me and video-streaming platform Youku.

The committee, sources have said, was headed by Alibaba CEO Daniel Zhang, with Ant Chairman Eric Jing serving as his deputy, and hundreds of executives across various affiliates participating at its peak. It was never publicly announced or acknowledged by Alibaba or Ant.

However, soon after Ant’s IPO was derailed and regulators clamped down on tech giants, Alibaba human resources staff told some employees in internal messages not to refer to the Alibaba Economy, two sources said.

“We absolutely cannot use the term ‘Alibaba Economy’ any longer,” one source described the messages as saying. “‘Economy’ is a term used by the state. We’re not an economy.”

To be sure, Ant and Alibaba remain close at the top decision-making levels. (For a Factbox on the scope of linkages between the two companies, click)

Nine out of 38 Alibaba “partners”, a group of founders and top executives that sets strategy for Alibaba, are Ant executives, including Jing, Ant’s CEO.

And Ant has made inroads overseas, demonstrating that it was getting on fine without Alibaba.

Alipay+, which connects global merchants with various international online payment methods, has grown to enable over one billion consumers, mostly in Asia, to make cross-border payments, since its 2020 launch. It recently disclosed team-ups with digital payment providers such as South Korea’s Kakao Pay and Europe’s Klarna.

“Alibaba is no longer a big tree that Ant needs to hold on to, especially for the overseas markets,” an Ant insider told Reuters, declining to be named as the person was not authorised to talk to media.