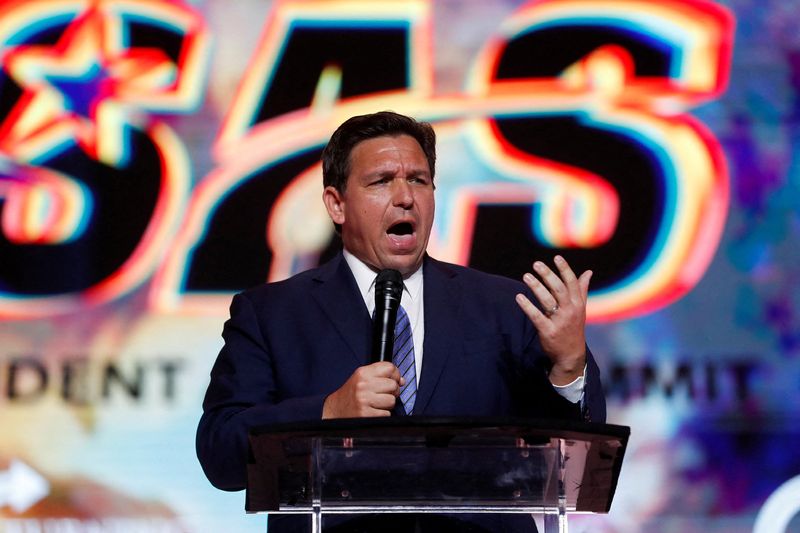 (Reuters) – Florida’s governor wants pension plans in conservative U.S. states to band together to fight shareholder initiatives on issues like climate change and diversity, but the idea may prove hard to pull off.

The call by Ron DeSantis last month opened a new front in Republican efforts to push back against activist-led environmental, social and governance — or ESG — initiatives at corporate shareholder meetings.[L1N2Z927V]

With assets of over $5.7 trillion under management, U.S. state and local defined-benefit pension plans are a powerful shareholder force that can help activists pass or defeat ESG issues on corporate ballots by declaring how they will vote and giving momentum to reform efforts, or slowing them.

But getting them to vote together as a bloc — as DeSantis wants — will be tricky, given Republican-controlled state retirement systems have voted differently on the same issue and have oversight structures that complicate efforts to influence their voting. The public funds also are rarely the biggest investors in U.S. companies, limiting their influence.

“It’s a shrewd political move to appeal to people who don’t like woke capitalism, but are they going to develop this huge voting bloc? No,” said Con Hitchcock, a Washington D.C. attorney who advises pension funds.

DeSantis, a Republican who has been courting conservatives as part of an expected presidential bid in 2024, suggested the pension system in his state of Florida work together with those in other Republican-controlled states like Texas.

“What we need to do is get other like-minded states to have all of our retirement systems’ voting rights used as a bloc,” DeSantis said at a July 27 news conference.

“We could be a real check against a lot of the excesses that we’ve seen and probably have enough resources to beat back a lot of this stuff.”

His office has said he plans to introduce legislation to counter ESG factors in investing. But it has not offered details on how that might affect proxy votes, the process by which investors cast ballots on items like electing directors, executive compensation and shareholder proposals at annual meetings.

DeSantis’s idea could make sense in theory, based on past voting patterns. Florida’s pension investment manager, the State Board of Administration (SBA) and the Teacher Retirement System of Texas – two of the largest pension funds in Republican-controlled states with some $440 billion in combined assets – were less likely to support ESG shareholder resolutions compared with funds in some Democrat-led states, according to Insightia, a corporate governance research arm of software company Diligent.

But the two systems still backed a majority of ESG resolutions this year, Insightia’s data shows.

While most shareholder ESG proposals are not binding, some have drawn much attention at corporate annual meetings.

For example, both the Florida and Texas pension funds sided with ESG activists in urging Costco Wholesale Corp (NASDAQ:) to set emission-reduction targets and asking McDonald’s Corp (NYSE:) to review its impact on issues like racial inequality, disclosures show.

In other instances, the two pension fund systems voted differently on the same resolution. For example, SBA backed and Texas opposed a resolution asking Nextera Energy Inc to publish directors’ gender and race or ethnicity. [L2N2XB1AO]

The SBA supported management only 42% of the time on “say-on-pay” questions related to executive compensation, versus 87% for the Texas system.

“A ‘red state’ voting bloc wouldn’t do much differently unless each state – including Florida – made huge changes to how they approach their use of proxy voting responsibilities,” Fields said, referring to Republican-leaning states.

“This would be a huge shift.”

The way the pension funds are managed is another hurdle.

DeSantis himself is one of three trustees who oversee the SBA, but other governors in Republican-controlled states have less direct influence on their pension systems.

“Part of the challenge is pension funds are managed a little bit differently in different places,” New York City Comptroller Brad Lander, a Democrat who oversees retirement money, said at an investor event this month.

In that vote, activist investor Engine No. 1 won three board seats at the oil and gas company after fielding candidates — including a former oil refining executive — on a platform to improve financial performance and focus more on clean energy. The move won early backing from public funds in New York and California.

“They elected people to Exxon’s board who opposed oil,” DeSantis said last month, mocking the election.

Records show the SBA voted for all four dissident hedge fund nominees while the Texas Teachers’ system supported three. A spokesman for the Texas system declined to comment.

The SBA has said the votes reflected factors like Exxon’s underperformance and a lack of board members with energy industry experience. The votes were meant to create “returns for our plan participants,” an SBA spokeswoman said.